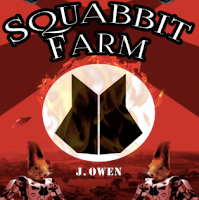 PACE
Squabbit Farm is a quick read, being short and to-the-point.

PERSPECTIVE
Third person omniscient. This book is written with a satirical lilt, so the narrator himself (and you'll see by the end that it is a "him") is one of the characters.

CONTENT REVIEW
Squabbit Farm is the satirical tale of a fictional race of sentient, bunny-like critters living in an idyllic world of green fields and blue skies. Although the everyman Robert Fluffenstein is ostensibly the main character, the real star of the story is the narrator himself. J. Owen writes with a distinctive voice that brings his dark comedy to life. I just happened to be listening to Good Omens, the Neil Gaiman/Terry Prachett satire about the end of the world, on audiobook around the same time as I was reading Squabbit Farm on my Kindle. While the subject matter is pretty different (although they're both about the end of the world), the two books share a similar dry sense of humor. I could practically hear the narrator for the Good Omens audiobook in my head while reading Squabbit Farm.

Squabbit Farm brings to mind another critter-centric satire: George Orwell's classic Animal Farm. In fact, just as Animal Farm is a thinly veiled allegory for the Russian Revolution and the communist rule under Stalin that followed, Squabbit Farm is a thinly veiled - if more exaggerated and bizarre - allegory for twenty-first century politics. It's almost a protest novel, depicting how technological advances and warmongering turn the picturesque Squabbit Farm into a totalitarian dystopia. While stand-ins for familiar sights such as social media, bureaucracy, and jingoism are instantly recognizable, Owen keeps the allegory from getting too heavy-handed through his wry wit. Even Squabbit Farm's darkest moments are told in an offhand, incongruently cheerful tone. It reads like a children's book gone wrong.

The key difference between Squabbit Farm and its comparable predecessor is that while Animal Farm is clearly about one particular place and time, Squabbit Farm is broader. It could apply to any country, really. Its faux lightheartedness also takes away any perception of judgment; this isn't a "shame on you" book. More of a "I see what's happening, and I'm just going to laugh about it because there's nothing else I can do" book. The happenings are more outlandish and exaggerated - for instance, the Squabbit version of the Internet is invented and implemented in a matter of days. Other than the thinly veiled allegories, the limits of reality are completely ignored.

While reminiscient of Animal Farm in subject and Good Omens in tone, Squabbit Farm is original in its warped sense of humor. Funny, engaging, and daringly unique, Squabbit Farm is a thoroughly entertaining read. Best of all, behind all the weirdness is an intelligent and well-produced dystopian satire.

THE NITPICKY STUFF
This book is very well edited. I didn't find any errors.

This book contains references to sex, drugs, and violence, but everything is depicted in an offhand, satirical manner. There's nothing graphic or gruesome.