Audiobooks are the best things ever. I've had times where I just lie back in bed and listen because I don't want to do anything else. This may sound like blasphemy, but sometimes, I think they can even be better than the print book. Put down your pitchforks and hear me out!

The first audiobook I listened to was The Girl with the Dragon Tattoo. I remember getting into it from the first minute of narration and being puzzled at the popular opinion, "It's good if you get past the first hundred pages." What was wrong with the first hundred pages? I liked the opening! I was also surprised by the criticism people had of the writing. People said it was stilted and clipped, but listening to the narrator, I thought it sounded plenty lively. Also, I tend to speed through sections when I read with my eyes, since I get impatient and want to know what happens next. Listening to an audiobook forced me to be patient, but I didn't feel forced. I was enjoying the reader's words.

Since I liked the first book so much, I bought the sequel, The Girl Who Played With Fire. I felt like returning to paper, so I got a paperback at a newsstand. Reading that book was among the more painful experiences of my life. I was so bored, I didn't know what to do with myself. I only powered through to the end out of sheer stubbornness, and I skipped entire passages I didn't give a damn about. The clipped writing got under my skin, and the pointless scenes (like Lisbeth going grocery shopping) made me raise my eyes to the skies and ask, "Why is this here?!"

I think, if I'd listened to the second book on audio, I may have enjoyed it more. Something about a talented actor can bring even a dull sentence to life. The nuances in one's voice, the expressive lilts... things that appear dull somehow develop color.

Also, when it comes to dialect, audio definitely wins. Another book I listed to on audio was The Help. I loved it. First person narration often bugs me for some reason, especially if the person has an accent. But listening to the four talented actresses who narrated different sections of The Help, I felt like I was in a room, listening to these ladies tell me a story one-on-one. Again, I was surprised by the criticism. People evidently didn't like the women's accents in the written book. When I cracked open a paper copy, I saw why. Having to read all those apostrophes and "Law" as "Lord" was pretty painful. 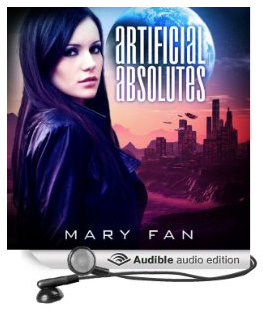 As a medium, I'm sure audiobooks are here to stay. The fact is, people don't have that much time to read anymore, and audiobooks present a nice solution. Instead of having to block out a chunk of time to just sit down and read, people can listen to audiobooks while at the gym, racing down the street, or driving. I have an hour and a half commute (each way), and audiobooks have been my saviors. They make me want to drive around the neighborhood for no reason so I can keep listening!

Lately, I've been listening to the audio version of my own book, Artificial Absolutes, which was just released this past weekend. I've never heard it before, and I figured I should listen to it at least once so I know my own product. It's so weird, hearing my own words read back to me. Most of the time, I forget I wrote it!

Email ThisBlogThis!Share to TwitterShare to FacebookShare to Pinterest
Labels: Articles - On Reading