REVIEW: The Sound and the Echoes / Dew Pellucid

TITLE: The Sound and the Echoes 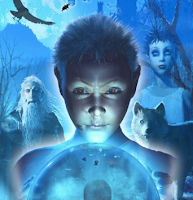 Recommended for fans of stories that take place in fantastical realms, such as the Harry Potter series.

The Sound and the Echoes follows 12-year-old Will from his ordinary life in Alaska to the fantastical realm of the Echoes. The Echo realm is a glittering winter wonderland, full of magic and mystery. Familiar territory for fans of contemporary, otherworldly fantasies. While very different in plot and concept, the enchanted atmosphere is reminiscent of the Harry Potter books in all the right ways.

PACE
The Sound and the Echoes moves along at a fairly steady pace, advancing the plot while taking the time to illustrate the fantastical world it takes place in. The mystery and intrigue make it easy to keep turning the pages.

PERSPECTIVE
Third person limited. The story is told from Will’s point of view and follows him through his adventures.

CONTENT REVIEW
In Dew Pellucid’s fanciful tale, every time a person is born, a second being—an Echo—comes into existence at the same time. These Echoes live in a winter wonderland beneath the Arctic, unbeknownst to their ordinary counterparts, called Sounds. Subjects of a superstitious monarchy, the Echoes believe their lives are bound to those of their Sounds. Therefore, when a Sound dies, his or her Echo is executed, in accordance with the Law of Death.