Seth Kaufman, author of The King of Pain, a satire about reality television, discusses his novel's themes, characters, and inspirations. Visit his website. 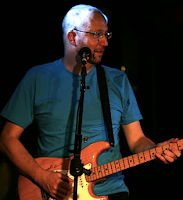 The King of Pain satirizes the world of reality television. Why did you choose to write about this subject?

There were a number of reasons.  First off, the backstory: I had been kicking around the idea of a Hollywood bigwig getting stuck under his entertainment system for a while. It was a fitting, comic visual metaphor about the role of media in our lives. But I wasn’t sure who, exactly, this trapped character was. I also knew I wanted to write about prisons. I had this title, “A History of Prisons,” in my head.  And so the two ideas just bounced around, literally for years.  But it wasn’t until the post-9/11 world, when the whole debate about water-boarding suspected terrorists surfaced, and the whole “is it torture?” question arose, that the book came together.  Reality TV and American Idol and Survivor were all red-hot, and all of sudden it became obvious to me that the man stuck under his monsterous wall unit reading “A History of Prisons” should be a guy with a hit TV show about torture.  And so I wrote the first draft in about 10 months, mostly on the subway going back and forth to work, alternating between the Rick Salter/TV story and the short stories. It sounds funny to say, but  I honestly don’t know if this book could have been written without Dick Cheney.

Now, the other thing about my background, is I know TV and I know celebrity culture. And even though I was once a TV reporter and a gossip reporter—or maybe because of those jobs—I’m pretty critical of TV and the cult of celebrity that powers it.  And so, reality TV is a ripe target, but it was also just a perfect setting for the guy stuck under the entertainment system.

One more thing about reality TV. It’s the most popular genre in America, and maybe in the world for all I know. The other day my nephew complained that kids in his high school only talk about reality TV and cell phones. That was pretty depressing statement, especially if you think about these shows, as Rick Salter sometimes does,  subjecting people to torture. Are we what we watch?  I don’t know the answer to that. But contestants in these shows often seem imprisoned to me, and if you are addicted to a show aren’t you, maybe, a little imprisoned too?  So Reality TV is a very thought-provoking form of entertainment. I though I could have fun exploring it.

How did you come up with the colorful line-up of contestants for the torture reality show, “The King of Pain”? Why did you choose a nun as one of the most prominent characters?

One of the joys of writing a novel is you get to be your own casting director, whether you are writing about TV or speculative fiction or historical romance. You get to decide what “types” you want.  So I guess I asked myself, what would Rick Salter do? I’ve watched enough Project Runway and Survivor to know that these shows want to appeal to a wide swath of demographics, but they also want friction and personality clashes. So that was easy.

As for inventing Sister Rosemarie, I’m not sure where she came from. I was thinking, who would be the most unlikely character for the show and came up with her. For the purposes of The King of Pain, she’s an interesting moral barometer for the whole show. She’s doing it for God. She’s about love. She hates torture. Good for her.

Ironically, after I finished writing The King of Pain, a book came into my office called Race to Grace. And it was about this real-life “Iron Nun” who runs triathalons.  Which shows that, as crazy as my book may be, it’s not that crazy at all. Pretty much everything in it was within the realm of possibility.

Rick Salter, the main character and  mastermind behind “The King of Pain,” is a Hollywood jerk. But ultimately, he’s not a wicked person, and one cannot help sympathizing with him. How did you go about developing his character?

Thank you for that perspective. I have grown very fond of Rick Salter, obviously.  I suppose he’s a composite of Hollywood characters that I’ve written and read about over the years.  Guys who love movies and love the business, but whose moral compass can go haywire at times. There are plenty of  lines and observations that Rick makes and recalls—say, about the constant supply of teens and tweens, or his screenwriter friend who says “that’s not the movie I wrote”—that are things I’ve heard in Hollywood.  The tricky thing about creating an anti-hero is trying to balance him, so he doesn’t completely alienate some readers.  Rick says a lot of insightful things. But the fate of the loudmouth—even a loveable loudmouth—is to offend some of the people some of the time.  And Rick does that. I do think he has many redeeming qualities.

You name yourself as the author of the book-within-a-book, A History of Prisons, which Rick comments on and sometimes criticizes. What was it like looking at your own writing from a character’s eyes?

It was fun. As you noted in your review, part of the book is about the joy of reading and the power of telling stories. I relished having Rick desplay some great  strong analytic skills one minute and then totally miss the point—my point—the next.

Among the stories in the book-within-a-book A History of Prisons, do you have a favorite?

Yes, I have a favorite. And let me just say that it is the one story that NOBODY has told me they like. So far, the stories seem to resonate the most with readers are  “The Stocks,” “The Gizless Days of Thomas Binder,” and “The Gift,” I like them all, of course.  But I really love “The Translator.”  I feel like it’s  a story that really gets to the transcendent power of story telling . I think that it’s also the most outrageous of the stories, at least with the crazy plot lines and insane sex scenes that entertain the inmates. But I love the craziness of it. And I love how it resurfaces into Rick’s life later in the book.

How did you come up with the idea to tie the frenzied, shameless media culture to prison stories?

When I was writing, I thought of the prison stories as tied to Rick and his situation. But you make a good point.  After the first draft was done, I ended up shifting stories around, trying to also match them against the events of the show so they resonated as they sort of rub up against each other.

But about the prison stories: My grandfather was a political prisoner in Poland between the wars. He did two stints of 4 year prison sentences. He basically rotted in jail in his 20s. I interviewed him a couple of times, and he talked very frankly about his time there. The converstations inspired two stories, “Longman” and “The Gift,” and a number of the themes that surface in of “A History of Prisons.”

I loved writing the out-of-control moments of “The Translator.” I guess there’s something liberating about literary perversity, about being outrageous.

The most challenging part was documenting Rick’s big moment with  Amanda and making it believable and vulnerable. That might be my favorite writing in the book, with Rick at his most vulnerable, and the way the interlude ends.

Writing the whole ending was tricky. Endings, for me, are the hardest thing about writing.  That and proofreading, which I am terrible at.

What kind of research did you conduct in order to write The King of Pain?

I didn’t do much, actually. The web helped me with “The Daquiri Case” with regard to the town of Daquiri and the lay out of Gitmo. I have to say that that story was created solely on the fact that the two places, both of which capture your imagination (or mine, anyway), are basically right next to each other, like heaven and hell being neighbors. In “Baxter Blood,” the web helped me  with mathmatical terms and confirmed that yes, prisoners do make license plates. But I knew, or thought I knew, quite a bit about the TV world.

Reality shows offer their participants more than cash prizes—many people use them as springboards to success and fame. Would you ever consider participating in one?

Ha! No.  Well, maybe if it involved writing or song writing.

A lot of writers live in New York City. Do you interact with them often?

Brooklyn is a huge place. It has pockets filled with writers, journalists, critics, editors, agents and media types. And so yes, I have a bunch friends and acquaintances who inhabit the literary world in one way or another. But except for parties and a monthly poker game, I don’t see them all that much. There is no Algonquin round table scene that I know about with, say, Jumpha Lahiri, Martin Amis, Jennifer Egan, and Jonathan Safan Foer all drinking Brooklyn Lager together.   I think they are all writing. And me, I have my day job and a family and a band, so I don’t have a huge amount of time to schmooze.

What’s your band like?
The Fancy Shapes are a fun, horn-flavored 7-piece party band. We play lots of island and funk flavored grooves. And I play a lot of african-influenced guitar lines and write most of the songs.  We usually play once or twice a month.  You can hear our CD (before we added horns) on Facebook or at thefancyshapes.com.

I saw on your website that your next book will be about gambling. Can you tell us anything more?

Uh-oh, I have to change that. I have a different book coming out in early November. It’s an illustrated parody and cautionary tale of a very successful children’s book. Our book is called If You Give an Architect a Contract. It is a traum-com. (Traumatic Comedy?) about the nightmare of home ownership and renovation. I’ll send you a copy when it’s out.

I am very excited about the gambling novel, which is called The Vig.  It should be ready by the spring. It’s about a nice, upper middle class bookie and a nice Carribean police officer who both wind up in Las Vegas on their own bizarre investigations, while I kind of use their missions to compare the world of gambling with the so-called “legitimate” world of business.  It’s sort of a slightly warped thriller.  It’s not as outrageous as The King of Pain, but is pointed and funny, too.  I hope.