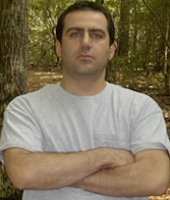 Which parts of Vespa did you most enjoy writing?

The science parts—I spent a few years of my life as a part-time scientist—studying entomology, zoology, parasitology, and even some basic insect evolutionary theory, through books, observations, and conversations with entomologists, all of which I applied to the creatures in Vespa as well as the main characters—entomologist Thomas Goodman, and parasitologist John Hickey. I also enjoyed the challenge of planning and writing the firefight inside Devil's Den, where the wasps chew through the nylon screen that was supposed to have protected the National Guardsmen while they slept. I knew before I wrote the scene that this battle between giant insects and armed men was going to represent my biggest challenge. But almost immediately after I'd banged the scene out that one night, I felt I'd largely nailed it. One literary agent, who after some serious consideration ultimately sent me a "Dear John" letter, told me the nighttime Devil's Den firefight scene was the scene that had most impressed him.