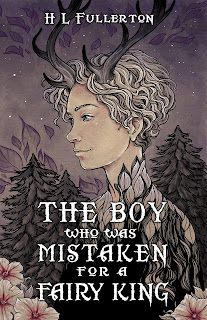 I thought I wanted to be a novelist, but after several false starts and abandoned projects, I decided to switch to short stories. My first fiction (Don't Look) was published in 2010, and I've been writing and submitting speculative fiction ever since.

Books. I'm reader who goes through books like a kid binging Halloween candy. And I think it's natural that at some point, after reading hundreds, thousands, of stories, you say, "I could do that." It took me awhile to actually attempt it and then a ton of tries until someone bought something I wrote.

I first imagined a flash length story about a human boy who kept getting mistaken as fae. So my initial idea eventually became the title of this much longer tale—The Boy Who Was Mistaken for a Fairy King—but I knew the story's length was going to be much longer than I planned the moment I wrote the first paragraph.

Among your characters, who's your favorite? Could you please describe them?

I love them all, but if I had a favorite it'd be the narrator. The hidden teller of the tale. Who isn't in the story, but tends to insert themself in the narrative and becomes less and less objective as the story progresses.

This is a hard one. But there are a series of scenes where Carl, a perfectly normal human boy (except for the antlers on top of his head), is greeted by some not-so-human creatures with some strange requests and yet he's pretty relaxed about the whole preternatural world existing alongside his and happy to be of help. In these odd meetings, Carl is just Carl. He's like, I have antlers, you're a tree in the shape of a man, why wouldn't we have a cordial conversation? And it never, not once, occurs to Carl at any point that the reasons all these fae beings approach him is because of his antlers. He assumes it's because he's a good listener.

SCENE EXCERPT:
“Hello,” Carl said as he took in his visitor’s appearance. Although, as with the troll, he wasn’t sure his first impression of ‘man’ was correct. The man was slender but solid, his build burly. Bones bowed under his skin like weighted branches. His multi-colored hair was prickly as a crew cut. As he approached, Carl realized the bristles weren’t strands of hair, but pine needles in shades of orange and green, representing all stages and hues of a pine needle’s life, from new growth to forest floor, and that his skin was scalloped like a pine cone’s seed scales, which, up close, made his flesh seem shattered.

“Greetings,” the pine man said and his voice echoed with silence the way all pines did. For Carl, who had heard trees talk all his life, it convinced him the stranger was not a man, but a tree in humanesque form, which he hadn’t realized they had. He wasn’t sure if this was a trick of his pine or all pines.

The first bit. First line, first paragraph, first page—the part where I go from idea to words. The part where it starts to get real. Or as real as fiction gets.

There is a lot of winging it involved. The Boy Who Was Mistaken for a Fairy King took me about six months to draft. I haven't ever thought about describing my writing process before, other than, I sit down and type out words. But it goes something like: get idea; think about idea; make up some characters with traits that make idea work; have fake interactions between characters in my head; figure out how to make all those interactions into a story; maybe scribble down some ideas for scenes or dialogue on scraps of paper and forget about them; brainstorm titles — I can't start a project without a title (Boy, With Antlers, was the initial title for this project); stare at a blank Word doc; spend more brain time germinating words until I get a first sentence good enough to type out. That first sentence gives me the style and mood of the story, and, once I have the first bit, I know the rest of it will eventually work. Sometimes it takes longer to figure out how it's going to work. If I get stuck, I spend more time writing sentences in my head or making up more scenes until I come across something that will work.

I tend to hover under the umbrella of speculative fiction—science fiction, fantasy, horror…  I like making things up, imaging things that aren't real but could be.

All of them. Every book and every author I've ever read—which is a lot. I piece together patterns I've seen elsewhere and stitch them together to make something a little different. I love authors who give good voice. And there are a lot of them out there. I'm very much a sucker for style over substance.

So much yes. I think I mentioned I originally thought this idea would be under 1000 words. And a light, fluffy story. Something cute. But then I wrote the first bit and thought, oh, it's going to be longer. And the teller of the tale snarked their way in and I thought, oh, it going to be darker. I initially hadn't planned on Evangeline's character and yet she became the backbone of the story. Oddly enough, I ended up in the same place at The End, so the story was both full of surprises and ended exactly the way I thought it would.