An interview with author L.K.D. Jennings.

I am mostly an indie author, with a pair of ebooks through Amazon and my newest book, Mark of the Conifer, was published via Kickstarter. I still submit to literary agents and collect rejections. I think a lot of what I write is a little too strange for the mainstream, considering my Highsong series is about psychic dolphins in space and Mark of the Conifer is a dinosaur version of Watership Down.

I remember being in an advanced reading class in 2nd grade, where we made our own books. Mine won an award and that was it for me. I also had major back surgery at the age of 14, and I wrote my first novel recovering from it.

Mark of the Conifer was very piecemeal. I knew I wanted to write a dinosaur book, but I wanted it to be scientifically accurate. The right period for the right species and soon. I visited the Utah Museum of Prehistoric Life in 2007. It’s an award-winning museum, totally incredible. Being able to look a Brachiosaurus skeleton in the face on a second story set the fire under me. I really got into research and then was like “Great! Now where’s my plot?” 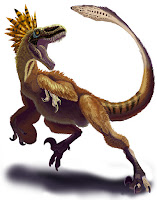 There’s a character called Spines-Rake-Sky who is my secret favorite. She’s kind of like a female ronin samurai dinosaur, a great fighter with a great heart who lost her family. She suffers from depression and is a deathseeker, and I found her more relatable than a lot of the other characters, who are younger and maybe a bit more idealistic. They haven’t suffered the kind of loss she has, and while I think it makes her wise and cynical, it also makes her compassionate and protective. She doesn’t want her friends to suffer like she has.

I have a few, but they all contain spoilers. There is one scene I really like, where the the villain and her brother are talking about the kind of brave new world they’re building under their rule. I wanted to have a very fascist feel, with a lot of propaganda and pithy slogans that solve every problem. Sarkanj, the brother, says “The jaws of enthusiasm are just as good as the jaws of genius.” That’s a Marxist quote: “... in the end, one will be found among us who will prove that the sword of enthusiasm is just as good as the sword of genius.” I was pleased at how well that translated into dinosaur culture, and it fit amazingly well for Sarkanj’s character: he’s very calculating, and would definitely have been the one to come up with easy answers to manipulate the gullible.

I like dialogue. I as part of a D&D group growing up that all wanted to be actors, so we really immersed ourselves and learned improv. How to be quick-witted and still in character was important to us, and it trained my ear for how to make dialogue sound natural but still literary. 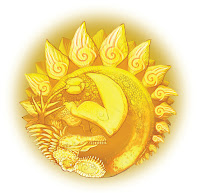 I write rough drafts pretty fast, no more than 6 weeks most of the time. But I’m terrible at rewriting and I definitely need more structure there. I’ve had much stronger plots outlined than Mark of the Conifer; Conifer was pieced together bit by bit over seven years and then took another 3 to edit. I am a very diligent outliner and I like that process, but I wish I could actually write, edit, and polish one novel a year.

Digression. If you can accept magic or talking animals or whatever fantasy elements there are, you can accept just about anything else. You don’t have to explain, you just have to make it plausible. I think there’s a lot of freedom in being able to say “This is the way the world is.”

Brian Jacques. He wrote the Redwall series. I read those books over and over and over when I was a teenager. He really had wonderful rhythm that made his books amazingly readable, and that came from his background as a musician and a radio host. I can still see a lot of him in my own writing.

I sometimes surprise myself when I read back over my dialogue and make myself laugh. I take that as a good sign that it’s probably worth keeping.

Thank you for having me! 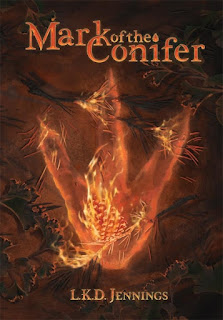 Hatched beneath a solar eclipse, the raptor Sunstrike enters the world in the shadow of Sol— the goddess of the dinosaurs. Devoted to Sol’s holy law, he keeps the Pact: the sacrificial regard between hunters and hunted.
But the balance is destroyed by the Empress Charr, a tyrant bent on ruling the North American Cretaceous. Her regime carries a mysterious magic: fire.
Sunstrike sets out on a quest for justice that reveals a terrifying destiny. He must face the Empress, as his dreams foretell that failure will mean the end of the world — and winning means the ultimate sacrifice.

Purchase links for Mark of the Conifer: