Today, I’m revealing the cover and story line-up for BRAVE NEW GIRLS: TALES OF HEROINES WHO HACK, coming July 2018! This YA sci-fi anthology (edited by sci-fi authors Paige Daniels and Mary Fan) features stories about girls in STEM (Science, Technology, Engineering, and Math)… Girls who hack not just computers, but whatever puzzles come their way, using their smarts to save the day. It’s got sci-fi mysteries, cyberpunk, space adventures, and more! Proceeds from sales of the anthology will be donated to the Society of Women Engineers scholarship fund. 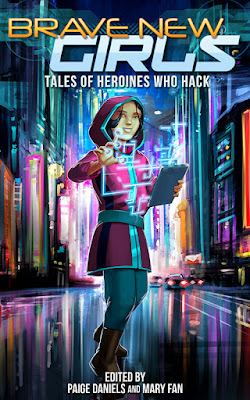 ADD IT ON GOODREADS: https://www.goodreads.com/book/show/38621003-brave-new-girls

Mary Fan is a hopeless dreamer, whose mind insists on spinning tales of “what if.” As a music major in college, she told those stories through compositions. Now, she tells them through books—a habit she began as soon as she could pick up a pencil. And what stories she has! Currently, she has three series in progress and likes to think that she has even more in her bag. Her books include Starswept, the Jane Colt trilogy, the Firedragon novellas, and the Fated Stars novellas.