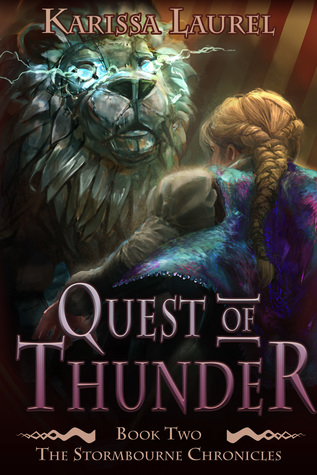 REVIEW
A princess on the run. A steampunk circus. A group of dark magicians who will stop at nothing. If you’re looking for an amazing fantasy adventure, boy, does Quest of Thunder (Book 2 of Karissa Laurel’s Stormbourne Chronicles) deliver! It’s a sequel that totally holds up to the original… in fact, it may be even better.

Evelyn Stormbourne is the last in a long line of thunder-wielding royals, but her own powers are faltering. She’s still on the run after the events of Heir of Thunder (Book 1 in the Stormbourne Chronicles), in which her father was overthrown and she was forced to flee a conspiracy of dark magic. She’s adjusting pretty well to common life, all things considered, but the bad guys aren’t done with her yet. They’re determine to enslave her and exploit her innate powers. Meanwhile, her country is in chaos. In Quest of Thunder, Evelyn hides in anonymity while searching for the Fantazikes—a group of nomads she allied with in the first book but lost touch with—in hopes that they can help her master her powers over the sky. But her identity doesn’t remain a secret for long; the young ruler of the kingdom she’s hiding in discovers who she is and invites her into her palace. Now, I don’t want to give too much away, but let’s just say that drama happens, and Evelyn is forced to run again… and this time she joins a traveling steampunk circus, working in exchange for passage to the last known location of the Fantazikes.

Quest of Thunder is an utter delight to read, full of magic, adventure, intrigue, and mayhem. Evelyn is a sympathetic protagonist who’s in way over her head… which makes her all the more fun to read about. And as with the last book, there’s a touch of romance. While Evelyn has great chemistry with her love interest, Gideon, she’s more concerned with surviving and figuring out how the heck she’s going to a) escape the bad guys and b) get her kingdom back. And have I mentioned the worldbuilding? A fantastical version of 19th century Europe full of airships, mechanical animals, and magic. While steampunk can walk the line between sci-fi and fantasy, the Stormbourne Chronicles fall squarely in the fantasy camp. I wish I could dive in and hang out with Evie and her friends. Everything about this book comes alive with immersive world-building and colorful characters.

I tore through the first book in this series and demanded an early copy of the second, which I promptly devoured as well. The third and final installment of the Stormbourne chronicles (Crown of Thunder) will be coming out in a year or so, and I can’t wait! 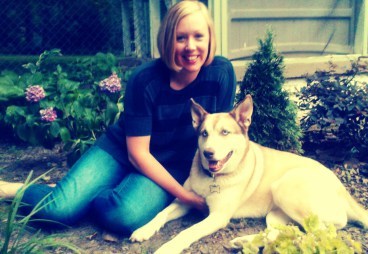 Karissa lives in North Carolina with her kid, her husband, the occasional in-law, and a very hairy husky. Some of her favorite things are coffee, chocolate, and super heroes. She can quote Princess Bride verbatim. She loves to read and has a sweet tooth for fantasy, sci-fi, and anything in between. Sometimes her husband convinces her to put down the books and take the motorcycles out for a spin. When it snows, you'll find her on the slopes.
Posted by Mary Fan at 7:07 PM