An interview with Dean Moses, author of A Stalled Ox.

Thank you for having me. The road to 1888 Center publishing A Stalled Ox was paved in 2014 with the Summer Writing Project (SWP) held on JukePop Serials. The SWP is an annual competition that tasks authors to write a serialized novella, one chapter at a time. Once you submit a piece, readers, and other writers, can comment and vote for your story. I did not get my story published that year, but I did learn a lot from the experience. So, when the 2015 SWP rolled along I wrote A Stalled Ox, and to my great appreciation, it was chosen for publication alongside two other contestants: Let’s Stalk Rex Jupiter! by Allison Spector and Beneath Blair Mountain by Shannon Barnsley. If you are a writer struggling to have your voice heard, I highly recommend you enter the SWP.

I have always loved to tell stories. I have written stories for as long as I can remember. But, despite loving the process since an early age, I grew to adore the art form after reading more and more books by the trade’s greatest craftsmen. Studying their technique: how they set out their stories, the pacing, character development, the art of descriptions, and their word usage furthered my undying calling to write. The love and passion was already inside of me, but continuing to read the masterful ways authors tell stories cemented the art and wove it into my very core.

It came from a few different avenues, one being addiction. Addiction can originate from many different paths: drugs, sex, television, video games, and food— things we could all, potentially, become dependent on. I remember my father becoming angry when he did not receive his dinner at the expected time, which almost always consisted of meat products. So I wondered: If something as widely available as meat suddenly became a rare commodity, would it also become an addiction? This, in turn, got me thinking about cults. Sects throughout history have often preyed on people’s desires and impossible expectations. A cult seemed to go hand in hand with my invented addiction.

Despite the fact he may or may not be a very nice guy, I have a soft spot for A Stalled Ox’s cult leader, known only as God. He is this unkempt, all controlling, and a rather terrifying individual. Despite this, one may be lucky enough to spot quick flashes of humanity in his piercing eyes. To me, characters that are either purely good or evil can be uninteresting. God may be both or neither, that is something for readers to discover and decide for themselves.

A Stalled Ox is about a near future in which the majority of the world’s livestock has been eradicated by a mysterious disease. Two agents investigate a cult that claims to, somehow, be eating meat despite this. One of my favorite scenes is one that was added in the editing process. Without giving too much away, this scene shows the cult’s recruitment process, and what happens to those who are not accepted. This whole chapter unfolds through the eyes of one young man who has grown up in a post-meat world. His mother used to describe the smell of bacon, the taste of steak—he wants nothing more than to experience the food of his parents’ era. This cult promises him exactly that, so he seeks this cult’s God.

When I write, I often get frustrated. Sometimes the story I have put together inside of my mind, the beginning, the middle, and end is not emerging on paper like I believed it would. After many re-writes, edits, and hours of irritatingly pummeling my keyboard something happens: the words start to match the idea my mind had for them. That’s my favorite part, when I hit an obstacle, but I keep pushing and pushing until it reads the way it was meant to.

It took about a full year for A Stalled Ox to get published from when I first started writing it, but that was a special circumstance. It has taken me years to write a story that still has yet to see the light of day, so I believe it all depends on each individual book. I usually write once a day, mostly after nightfall. I like to have a beginning, middle, and end setup in my mind before I start to write a story out.

I had never really written a horror/thriller story before. I have written historical fiction, drama, etc. However, my work in those genres has never been published. I had this idea for A Stalled Ox, and when I began to write it, it just felt right, from the beginning. Throughout the Summer Writing Project I received kind comments stating that it was really scary stuff, one person even said it was too scary for them to continue reading. A genre that, in the past, I never considered writing turned out to be one that got my work published. Sometimes you need to go outside of your comfit zone to discover your true potential.

There are so many: F. Scott Fitzgerald, Edgar Allan Poe, J.M. Barrie, and James Randi. I also have a deep love for some screenwriters who have inspired me, such as Orson Welles and Rod Serling.

While editing A Stalled Ox with my editor, Shuann Grulkowski, we discussed some changes. We wanted to add a few more chapters, ones that were not seen by anyone in the SWP. He came up with an idea for a great additional chapter, which prompted me to add another idea on top of that. Now, that chapter is one of my favorites in the book, and from what readers have told me, one of the most chilling. That all came from, like you said, talking about the characters’ lives which in turn took us to a subtle yet very fulfilling plot twist. 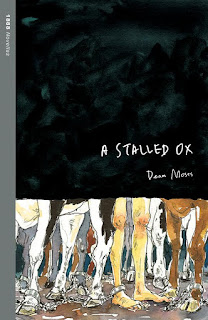 An isolated religious cult has reportedly been consuming meat while the rest of the planet has been forced to live a life without it. Presuming this sect has resorted to cannibalism, two agents from an organization known simply as The Agency are dispatched to investigate. Will they find evidence of humans eating one another? Or is something even stranger taking place?

Email ThisBlogThis!Share to TwitterShare to FacebookShare to Pinterest
Labels: Interviews - Other