When I read George Ebey's Brave New Girls submission, Helen of Mars, I knew right away that I was looking at something special. Hard sci-fi inspired by real-world recent Mars discoveries, starring a brilliant teen heroine who uses her tech smarts to save her family's future... Oh, and did I mention there are robot fights ON MARS? 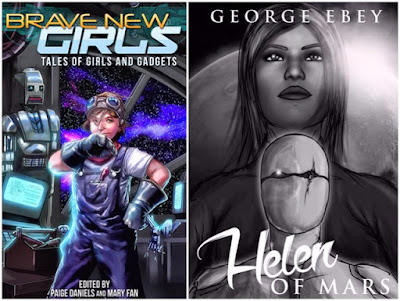 So when I heard that Glass House Press had contracted George for a series about Helen and her Mars rover, I was like OH MY GOD YAY!!! And today, the cover and official description were released... Feast your eyes and get excited, because this is going to be AWESOME!!!

A game to end all games. On the line: her family’s future. Will Helen’s creation be enough to win the day? Or will she lose, and take her family down with her?

Helen Hunter’s father hopes to make his fortune by sending a robotic rover, controlled from Earth, to mine the surface of Mars for precious ores.

But there’s a catch. To do it, he’ll have to assume financial responsibility for the rover.  And on the harsh and desolate surface of Mars, one false move can mean the difference between untold riches and utter disaster. It’s a risky move that could spell doom for the entire family … and their hopes for the future.

Unless Helen can intervene.

The company behind the mining system—MARSCORP—is holding a junior gaming competition at their annual convention, and this is her chance. Grand prize is a one-year lease on a brand new Mars mining rover. Winning would mean that her father gets his shot at the Martian bonanza without any risk to the family.

But it won’t be easy. Teens from all over the country have come to compete. Some are smart. Others, ruthless. And Helen’s not the only one who needs to win. The mission: use her personally designed robot to fight it out in a high-tech arena that can simulate any environment, real or imagined. Beat the competitors. Bring home the prize.

Luckily for Helen, gaming and robot design are her specialties.

And when she unleashes her newest creation on the competition, a miniature homemade rover she calls DEBBI, the world is going to see just how skilled she really is.

The question is … will it be enough?
a Rafflecopter giveaway
Posted by Mary Fan at 11:20 AM