Cooking Up a Tasty Crime Novel 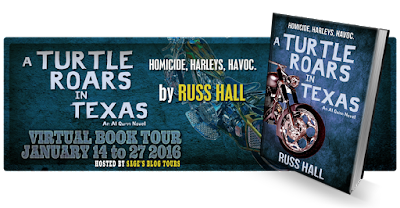 Cooking up a tasty crime novel

by Russ Hall
Author of A Turtle Roars in Texas

In a crime novel, the reader wants complex engaging characters, a tangle of a story that is rich in detail through which the protagonist must navigate. Add to this a setting that provides an appropriate backdrop to the fairly constant tension and danger. From this carefully balanced stew, catharsis can emerge from chaos and conflict.
If you had to compare crafting such a novel with, say, cooking, you might want to lean to the dynamic dishes of something like Thai cooking as an example.
There, in addition to the four basic tastes of sweetness, sourness, bitterness, and saltiness, you have an additional savory taste known as umami. It’s not an entirely new concept, since some culinary experts have for years included “pungent” as a fifth taste.
Since umami has its own receptors rather than arising out of a combination of the traditionally recognized taste receptors, scientists now consider umami to be a distinct taste.
Tomatoes are rich in umami components, as is Soy Sauce. Malcom Gladwell asserts that umami is behind the lasting power of ketchup as an ingredient. Not surprising since the original ketchup was a fish sauce that contained anchovies. Anchovies are also a key ingredient in Worcestershire sauce.
When To Hell and Gone in Texas came out, the first book in the Al Quinn series, someone said it had umami. I replied, “That’s what I was going for.”
Umami has a mild but lasting aftertaste that is difficult to describe. It induces a sensation of furriness on the tongue, stimulating the throat, the roof and the back of the mouth. By itself, umami is not palatable, but it makes a great variety of foods pleasant especially in the presence of a matching aroma.
Many people may not care for anchovies, for instance, but like the pungent, or umami edge they can provide when part of the cooking process. Italian chefs know that the strong fishiness of anchovies melts away when cooked early into a pasta sauce.
As I wrote A Turtle Roars in Texas, the next book in the Al Quinn series, I was after that same balance of the basic four tastes, with umami thrown in for lasting satisfaction.
It’s not hard to spot the bitter, sour, salty, and even sweet stretches in a crime book. But umami is what pops the novel to the next level of the kind of book that is hard to put down, and is memorable once finished.
So, without going to hoisin or oyster sauce, I seek as an author to aim for a good crime book that has a good balance of all five tastes. The umami bits come in as a snippet here, short scene there, edgy moment, or other ingredient that might not stand up on its own but is swept into the mix. Not one of the tastes should overpower, but in the end it is that hard to describe umami that raises a book to stand out not as just another book in a genre, but something a little special.
Why would an author seek this somewhat difficult-to-describe quality? Well, a psychologist might say it’s because of the gestalt: when the sum of the whole becomes greater than the parts. As with a memorable meal, the author seeks an experience for the reader that lingers from a tasty book that was worth reading.


And that is just what I sought to do when crafting A Turtle Roars in Texas in my writing kitchen.

A Turtle Roars in Texas 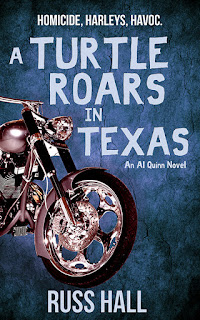 Detective Al Quinn had hoped to spend his retirement fishing at his lakeside home and taking care of the local deer. That bubble pops when Gladys Sanders, the sixty-year-old co-owner of an organic farm, is found dead by her two sisters, her body displayed like a scarecrow. On the same day, her son is run over in his kayak.

Evidence slips away from the scene right under the noses of two deputies, so Sheriff Clayton asks Al to mentor a younger detective. That simple task explodes into raw danger when three rival biker gangs with ties to Mexican cartels start mixing it up in earnest.
ICE Agent Jaime Avila tells Al that old turtles ought to leave the fighting to the young. But when the danger involves Al’s brother, Al dives into the heart of the ruckus. Before the war is over, the gangs just might get to hear the turtle roar. 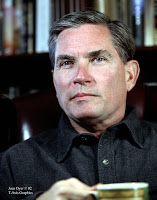 His graduate degree is in creative writing. He has been a nonfiction editor for major publishing companies, ranging from HarperCollins (then Harper & Row), Simon & Schuster, to Pearson. He has lived in Columbus, OH, New Haven, CT, Boca Raton, FL, Chapel Hill, NC, and New York City. Moving to the Austin area from New York City in 1983.

He is a long-time member of the Mystery Writers of America, Western Writers of America, and Sisters in Crime. He is a frequent judge for writing organizations. In 2011, he was awarded the Sage Award, by The Barbara Burnett Smith Mentoring Authors Foundation — a Texas award for the mentoring author who demonstrates an outstanding spirit of service in mentoring, sharing and leading others in the mystery writing community. In 1996, he won the Nancy Pickard Mystery Fiction Award for short fiction.

On Red Adept Publishing http://bit.ly/RAPTurtle
On Goodreads: http://bit.ly/1OBCi7I
On Amazon: http://amzn.to/1ldEy9T
Posted by Mary Fan at 8:00 AM