Halloween is just around the corner, and in anticipation, I'm dedicating this week to horror writer Stephen Kozeniewski, writer of creepy chills and gruesome thrills. The culmination of this series is a guest post by the man himself. 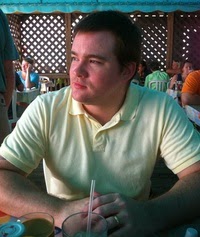 I’m asked fairly regularly, “Why, Steve? Oh, God, why would you? How could you? Have you no soul? My God, no! Who could even think of that?”

Which I interpret as, “Why do you write horror?” It’s a fair question, and one I never get exhausted answering, just as, say, a person with a goiter never gets tired of little kids pointing and shouting, “What’s that on your neck?”

If I were to wax philosophical for a moment (and I were) I would point out that some, though not all, fiction genres are directly connected to emotional responses. Consider, for instance, romance or mystery, which are very closely linked to the emotions of love (or sometimes lust) and curiosity, respectively. As a counterpoint, some genres like, say, science fiction or Westerns, promise certain outer physical trappings, while the core emotions exposed vary somewhat. While they all boast spaceships and laser battles, my feelings while watching Star Trek, Star Wars, and Lost in Space vary quite widely.

Horror, though, I’m fond of pointing out, is an emotion. Horror is one genre that provides exactly what it states on the tin. The author (or filmmaker, or artist, or whatever, but let’s just focus on books for now) will be trying to horrify you. This can’t even be said to be the case in a genre as seemingly up-front as, say, romance. Some romance authors want to titillate you with sexy sexed-up sexiness, others want to make you cry at a lost (usually cancer-related) love, and still others want to fill you with that warm glow of happily-ever-after true love.

Horror as a genre represents a certain purity of purpose that I rarely find anywhere else in the world of fiction. If a novel bears that stigmatic “H” it promises, “Dear gentle reader, unless I, your humble author, fail miserably at my appointed task…you’re about to get freaked the fuck out, son.”

Which segues into my next point. Why would anyone want that? Why would anyone want to be scared? It’s interesting, I think, that no one ever questions someone’s decision to board a rollercoaster, but the act of picking up a horror novel raises all kinds of stink-eyes and lolling tongues of disgust. Yet the two acts are fundamentally the same. It is the act of stimulating the body into believing it is in danger.

And here we get down to about the limits of my technical knowledge, although I do know this: fear is the basest emotion. At the very core of the heart of the lizard brain, hidden away deep in your amygdala, surrounded by all that other fancy grey matter that evolved over the years to appreciate Mozart and potato skins and everything else that requires advanced thought processes, down at the heart of it all lies the fight-or-flight response. This was primitive man’s survival mechanism. Faced with danger, the lizard brain floods the body with hormones that allow it to think faster, run harder, and fight back with more strength if necessary.

That’s fear. “Fear,” as The Doctor pointed out in a recent episode of Doctor Who, “is a superpower.” And on the other side of it, after the fear is gone, comes catharsis. That sense of accomplishment. You rode the rollercoaster. You watched Pinhead fuck that guy up and you didn’t look away once. Think of the warm, fuzzy smile you get after sex. The greater the orgasm, the greater the smile, right?

Horror readers get to experience that warm glow every time they reach those words “the end.” Fight-or-flight has ended, the artificial fear has been vanquished, and you have only the sense of accomplishment of having finished it. What other genre offers you an adventure in the process of reading, along with the pleasures that come with any story? It’s like getting twice as much for your money.

As a matter of fact I’m ready to declare it: Horror. Best genre ever.

Stephen Kozeniewski is the author of Braineater Jones, The Ghoul Archipelago, and Billy and the Cloneasaurus. He is also a contributing author for two anthologies: Another 100 Horrors and At Hell's Gates. Check out his blog, Manuscripts Burn.
Posted by Mary Fan at 7:00 AM