Thanks, Mary, for letting me crash the party here at Zigzag Timeline!  I thought I’d talk a little bit about the epic fantasy tradition in which I’m writing, aka how I turned childhood escapism into a career (well, more or less).  First, like a lot of writers, I started out as a reader.  Weaned on Tolkien, I graduated to the sci-fi/fantasy aisle at the local bookstore and devoured pretty much anything my parents were willing to buy me.  Epic fantasy was my favorite.  I read enough Dragonlance and Forgotten Realms to contribute significantly to deforestation.  Eventually, I graduated to Raymond Feist, Katherine Kurtz, and Robert Jordan.  I loved (and still love) complicated worlds that, for all their oddity, still resonate with deeply recognizable, human elements—fear, love, loss, selfishness, cowardice, and of course, courage.

That gets me to my next point: building a believable world.  Although I doubt I’m among the first one thousand people to voice this sentiment today alone, George R. R. Martin is a great example of how epic fantasy world-building is done.  Yes, you have dragons and magic, but what really makes A Song of Ice and Fire worth reading is the depth of the characters, the way we relate to the internal struggles of the various members of House Stark (and to the Lannisters, whether we admit it or not).  In other words, magic isn’t the backbone of Martin’s stories; it’s almost peripheral, especially compared to the richness of the characters’ personalities, their many sins and successes. That’s how you create a believable world.  It’s about the characters, not the actual plains and deserts and forests.  You have to build it brick by brick, idiosyncrasy by idiosyncrasy, flaw by flaw.

I also have a background in contemporary poetry, which has influenced and benefited my fiction writing a lot more than you’d think.  In poetry—even narrative poetry, which I favor—the energy has to come not from lofty, pompous abstractions, but from visceral imagery and sound.  The primary goal—as with any art form—is to entertain.  So poetry helps me (at least, Ihope it helps me) to streamline my sentences, to add an extra lyrical/musical quality to my descriptions.  Of course, as with many things, I leave that final judgment up to the reader.

Getting back to my original point, I’d like to stress my belief that you can’t be a writer if you’re not a reader.  Otherwise, it’s like trying to be a chef when you hate food.  You have to not only love language; you have to be curious about different styles, different ways to get from A to B.  When I read (whether it’s fantasy, literary fiction, or poetry), I’m always underlining passages and dog-earring pages so I can come back and savor a certain passage, a unique description, a slightly new take on how to do a fight scene, etc.  That’s been invaluable in building my fantasy worlds.  I described that earlier as escapism but actually, perhaps subconsciously, I think it’s also about building a world in which the events of our world are recast, reinterpreted, so that the outcome is finally what we think it should have been. 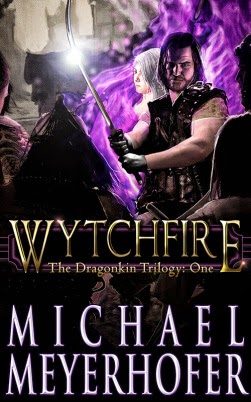 Wytchfire (Book One: The Dragonkin Trilogy) by Michael Meyerhofer

In a land haunted by the legacy of dead dragons, Rowen Locke has been many things: orphan, gravedigger, mercenary. All he ever wanted was to become a Knight of Crane and wield a kingsteel sword against the kind of grown horrors his childhood knows all too well.
But that dream crumbled—replaced by a new nightmare.
War is overrunning the realms, an unprecedented duel of desire and revenge, steel and sorcery. And for one disgraced man who would be a knight, in a world where no one is blameless, the time has come to decide which side he’s on.
BUY IT HERE: