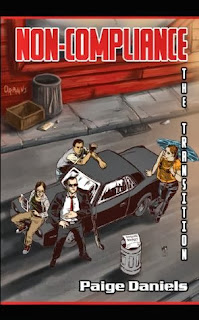 In the world of Non-Compliance, Paige Daniels's dystopian cyberpunk series, the rules are simple: you either agree to have a brain chip inserted, giving the Powers That Be a way to track your every move, or you're sent to live in the lawless Non-Compliance Sector. The only semblance of order in the NCS is kept by Boss, for whom our heroine, Shea Kelly works, but now a new power has moved in, seeking control. While Boss is far from a saint, he ultimately has the peoples' best interests in mind. Ramsey, on the other hand, is a power-hungry psychopath who will do anything to get his way. To make matters worse, the government appointed Magistrate is circling, searching for a way to get rid of Boss without causing the sector to erupt into chaos.

In Non-Compliance: The Transition, the second book in the series, Daniels turns up the heat and rachets up the stakes. Shea and her cohorts, working for Boss, cut a deal with the Magistrate. The Magistrate will leave them alone if they bring down Ramsey, who is a problem for him as well. But the clock is ticking, and Ramsey proves to be a formidable opponent. Highly intelligent and extremely brutal, his presence in the NCS makes every day a danger for Shea and those she cares about. The plot is somewhat reminiscient of a mafia film, with many dark, gritty elements and relentless pacing. Daniels doesn't hold back in her depictions of Ramsey's cruelty or the bleak world those in the NCS live in.

The tone and plotting are impeccable, but what really makes Non-Compliance: The Transition stand out are the characters. Shea is tough and smart as a whip - except when her stubbornness gets in her way. She holds her own against enemies she doesn't seem to stand a chance against, and her smart-mouthed, tom-boyish attitude make her a standout among sci-fi heroines. Much of the story explores her tempestuous relationship with Quinn, Boss's gruff second-in-command. The air practically crackles with their romantic tension, which Daniels deftly portrays without ever distracting from the central plot. Also memorable are Wynne, Shea's brilliant best friend, Gordo, a kid hacker, and, of course, Boss, who doesn't get much "screen-time" but whose presence is felt throughout the story.

Non-Compliance: The Transition delves into the back stories of these characters, revealing more about their histories and sharing secrets that were kept from us readers in the first book. The sequel also gives readers a broader look at the world outside the NCS. While Shea's immediate problems are within the NCS, larger conspiracies are afoot, and Daniels tantalizes us with glimpses of the greater evils being done in this grim future.

I was a huge fan of the first Non-Compliance book, and I couldn't wait to get my hands on the second (even refused to read a preview chapter because I knew it would be too torturous for me to see a bit and then have to wait to find out more). I'm happy to report that the sequel far exceeded my expectations. In fact, I think it's even better than the first book. In Non-Compliance: The Transition, Daniels took everything that was great about Book 1 - the characters, the danger, the dystopian world-building, the clever plotting, the snappy dialogue - and elevated it. I loved every moment, and I can't wait to read Book 3 when it comes out.

Paige Daniels is the pen name for Tina Closser. When she isn't busy with her nine to five job as an electrical engineer she helps her husband with a small hobby farm complete with a mini horse, cows, and sheep. In between farm duties and running the kids to gymnastics she likes to write, thus the creation of this novel.

RELATED:
Review of Non-Compliance: The Sector
An Interview with Paige Daniels
Posted by Mary Fan at 7:22 PM