REVIEW: Katarina the Dragonslayer and the Foebreaker's Curse 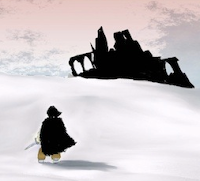 This book is the first in a series

PACE
Katarina the Dragonslayer and the Foebreaker’s Curse rolls along at a decent pace, alternating between action and world-building.

CONTENT REVIEW
Katarina the Dragonslayer and the Foebreaker’s Curse follows the adventure of a young half-Elvish girl, the titular Katarina. In this fantastical universe, which Medina laced with elements of science fiction, the children of humans and elves are often sold as slaves who must work to buy their freedom. In the novel’s opening, Katarina is sold to a silkworm farmer. An innovative and precocious child, she invents new ways to improve the farm. One day, a dragon attacks her village, killing her master. Katarina manages to slay the dragon. Not long after, she meets an old Elf called Oren, a master of ancient ways, who takes her under his wing.

In Medina’s world, dragons can be either good or evil. While the first dragon Katarina encountered and slayed was wicked, she befriends another dragon not long after. This dragon, Dalandra, actually helps train her in how to kill the wicked among her own kind.

Katarina is a feisty and likable young heroine. Bold, brave, and intelligent, she’s reminiscent of Arya, Ned Stark’s daughter, from George R. R. Martin’s Game of Thrones series. She’s quick to take action, which sometimes gets her into trouble, and yet humble in the presence of those wiser than her.

The world Medina has created in his novel will seem familiar to fans of J.R.R. Tolkien. Medina even writes with a similar storyteller’s lilt, describing the silkworms as not nasty worms in a similar manner to how Tolkein opens The Hobbit with a description of how hobbit holes are not nasty holes. However, Medina seems to have borrowed the best of Tolkein—the imagination, the distinctive voice, the journey—and given it his own twist while leaving behind the old master’s lengthy, not-so-fun exposition. Also, this may come as sacrilege to some and is mostly likely due to my 21st century sensibilities, I believe Medina is more appealing than Tolkien in his pacing and dialogue. Katarina moves forward at a fine pace, and between the world building and the adventure, there’s never a dull moment.

Medina has clearly spent a lot of time developing his mythology, and it really shows. The laws of his universe are well drawn, and it’s easy to get lost in the expansive world he’s created. He creates and uses his own terminology, for which there is a helpful appendix at the back of the book.

For fans of epic fantasies, Katarina is a welcome return to the kind of fun heroic adventures we all love. While Katarina is not necessarily a children’s book, its child protagonist, bright adventure, and colorful characters will definitely appeal to younger audiences.

THE NITPICKY STUFF
I found a few errors, but nothing distracting.

This book contains some fantasy-style violence.

AUTHOR INFO
Katarina the Dragonslayer and the Foebreaker’s Curse is Samuel Medina’s debut novel.
Posted by Mary Fan at 10:18 PM