Yannis Karatsioris, author of The Book of the Forsaken, answers questions about his novel's concepts and characters. Visit his website. 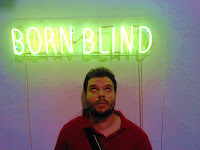